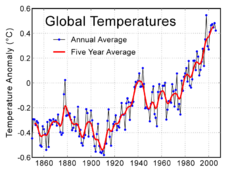 " The world is being hotter and hotter "
Why ? Due to 'global warming'
What is this?

Global warming is the increase in the average temperature of the Earth's near-surface air and oceans in recent decades and its projected continuation.

Global average air temperature near the Earth's surface rose 0.74 ± 0.18 °C (1.33 ± 0.32 °F) during the twentieth century. The Intergovernmental Panel on Climate Change (IPCC) concludes, "most of the observed increase in globally averaged temperatures since the mid-20th century is very likely due to the observed increase in anthropogenic greenhouse gas concentrations,"[1] which leads to warming of the surface and lower atmosphere by increasing the greenhouse effect. Natural phenomena such as solar variation combined with volcanoes have probably had a small warming effect from pre-industrial times to 1950, but a small cooling effect since 1950.[2][3] These basic conclusions have been endorsed by at least 30 scientific societies and academies of science, including all of the national academies of science of the major industrialized countries. The American Association of Petroleum Geologists is the only scientific society that officially rejects these conclusions.[4][5] A few individual scientists disagree with some of the main conclusions of the IPCC.[6]

Carbon dioxide during the last 400,000 years and (inset above) the rapid rise since the Industrial Revolution; changes in the Earth's orbit around the Sun, known as Milankovitch cycles, are believed to be the pacemaker of the 100,000 year ice age cycle.

Climate models referenced by the IPCC project that global surface temperatures are likely to increase by 1.1 to 6.4 °C (2.0 to 11.5 °F) between 1990 and 2100.[1] The range of values results from the use of differing scenarios of future greenhouse gas emissions as well as models with differing climate sensitivity. Although most studies focus on the period up to 2100, warming and sea level rise are expected to continue for more than a millennium even if greenhouse gas levels are stabilized.[1] This reflects the large heat capacity of the oceans.

An increase in global temperatures is expected to cause other changes, including sea level rise, increased intensity of extreme weather events, and changes in the amount and pattern of precipitation. Other effects include changes in agricultural yields, glacier retreat, species extinctions and increases in the ranges of disease vectors.

Remaining scientific uncertainties include the exact degree of climate change expected in the future, and how changes will vary from region to region around the globe. There is ongoing political and public debate on a world scale regarding what, if any, action should be taken to reduce or reverse future warming or to adapt to its expected consequences. Most national governments have signed and ratified the Kyoto Protocol, aimed at reducing greenhouse gas emissions.

The term "global warming" is a specific example of the broader term climate change, which can also refer to global cooling. In common usage the term refers to recent warming and implies a human influence.[7] The United Nations Framework Convention on Climate Change (UNFCCC) uses the term "climate change" for human-caused change, and "climate variability" for other changes.[8] The term "anthropogenic climate change" is sometimes used when focusing on human-induced changes.

Posted by nikhil at Sunday, August 12, 2007 No comments: Links to this post

Posted by nikhil at Saturday, August 11, 2007 No comments: Links to this post

Quotes on the Flag of India.

" This flag is of Indian Independence. Behold, it is born. It is already sanctioned by the blood of martyred Indian youths. I call upon you gentlemen, to rise and salute this flag of Indian Independence. In the name of this flag, I appeal to lovers of freedom all over the world to cooperate with this flag in freeing one-fifth of the human race. "
Posted by nikhil at Saturday, August 11, 2007 No comments: Links to this post

Posted by nikhil at Friday, August 10, 2007 No comments: Links to this post

Today heard the news that scientists found a new planate which is biggest in universe . It bigger than Jupiter. Its diameter is 1.7 of Jupiter! Its name is TrES-4 . It is about 1,400 years far from our earth. Its temp. is 2300' !!!

Hi friend,
I am Nikhil. This is my site and welcome. I am posting here my favorite things , photos, news, information ..... etc.

Posted by nikhil at Wednesday, August 08, 2007 No comments: Links to this post